How Eraser Is Made | History, Raw Materials, Manufacturing Process And Types

There is no doubt or mistake about it that an eraser is a student’s best friend! It gives you the chance of undoing something that you have done and then try again. You get innumerable chances of correcting yourself if you have an eraser and hence, even when the adults sit to make a draft about something they are not sure, they use a pencil and eraser.

The eraser may come as a small partner with the pencil, sitting on top of it, or it may come in as a new stationary product altogether. However, it’s only by the eraser that you can rub off your errors in no time. Erasers are not just for pencils, but for pens as well. While it was thought to be a myth, it is true that the pink side of an eraser rubs off the pencil marks while the blue side rubs off the pen. Whoever, ink marks don’t wonder off as easily as that of the pen. Do you want to know how erasers are made? Well, hop into this article and find out. In addition, here are How Leather Jackets Are Made!

How Eraser Is Made | History, Raw Materials, Manufacturing Process And Types

Before we start, do you know where the erasers or rubbers (called by the non-Americans) did was found? Well, let’s take a short trip around it with history of the eraser

Back in 1736, French scientist and explorer Charles de la Condamine saw the native American Indians using a substance form the tree that was resin to make bouncing balls. He took it along with him back to Europe and soon it was found that this material could rub out the graphite marks from paper. Before this, bread were the only substance that was able to do this but not with this accuracy. This made them keep the substance’s name rubber because it could “rub off” marks. However, they noticed that this rubber would rot after a while. The idea of making rubber last long was then invented a century later. This was done by the curing process. 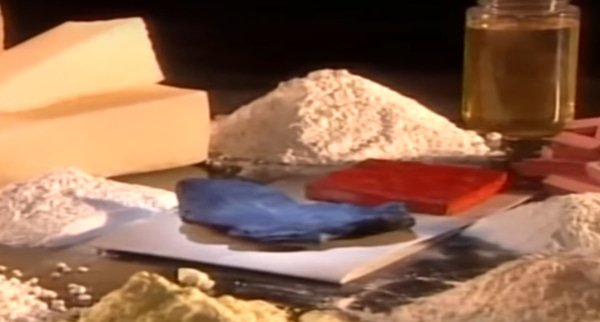 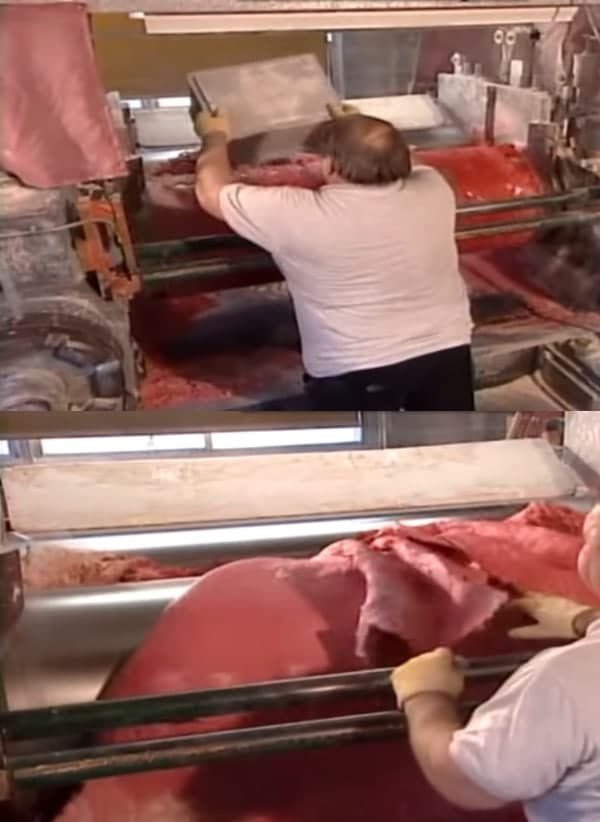 the process starts by putting a batch of rubber into the mill where is passed and rotated between large rollers that are heated. In this process, they also throw in any of the defective erasers from previous batches. Then sulfur is added to this mixture that acts as a curing agent. Next, accelerators are added to help fasten the curing process and coloring. This mixture is blended for 10 minutes till it get a consistency of thick dough. 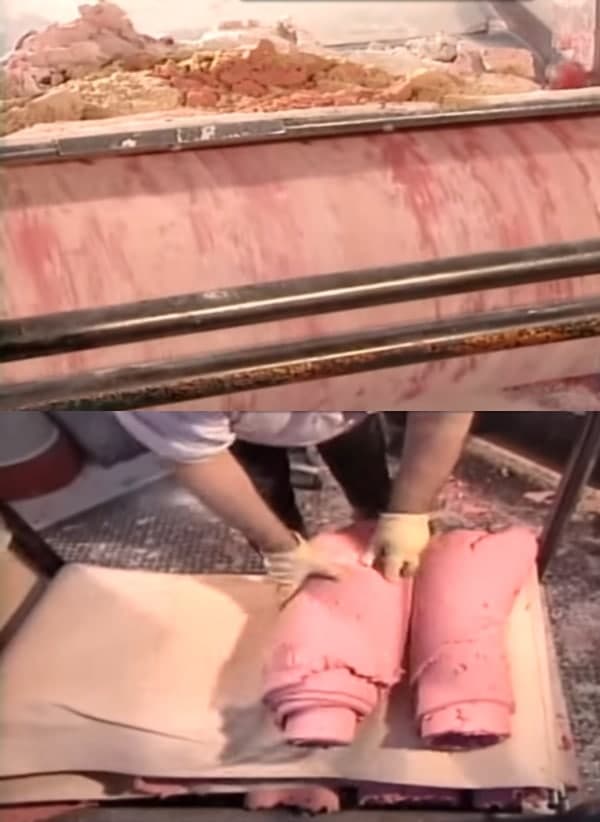 Then vulcanized vegetable oil (vegetable oil treated with sulfur), regular vegetable oil, and calcium carbonate as fillers are added to this mixture and mixed well. as the color and thickness becomes just right, the workers remove the rubber form the mill. Then it is left to cool at room temperature for about half a day. 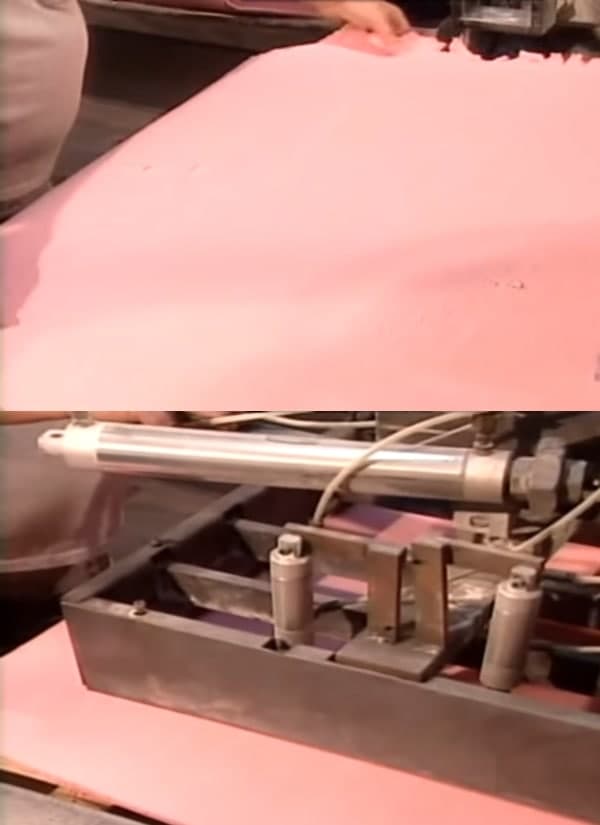 After that, they cut out large squares of the rubber sheet that weighs about 5-8 kilograms. It depends on how the client has ordered for the rubber to be. 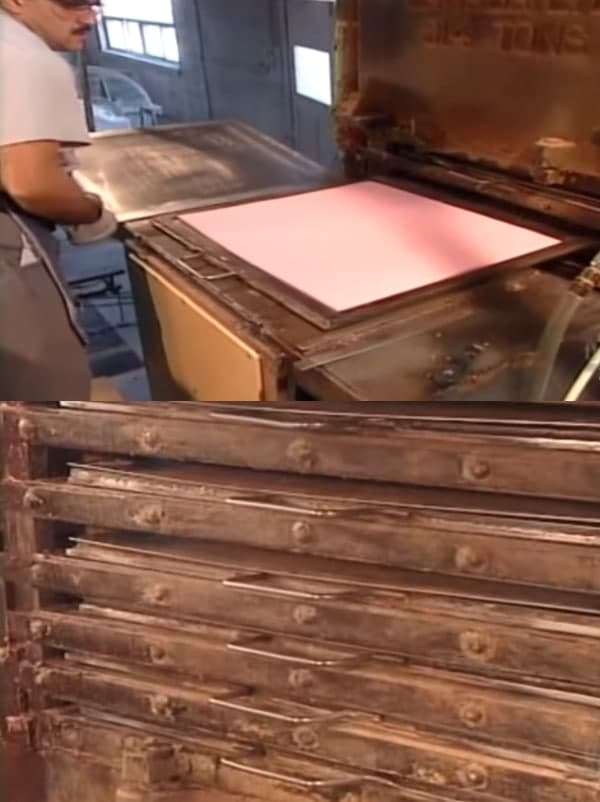 Next, they put the rubber into a hot steaming press for about 20 minutes to cure at 163 degree Celsius. The pressure compacts the rubber and the heat hardens it. 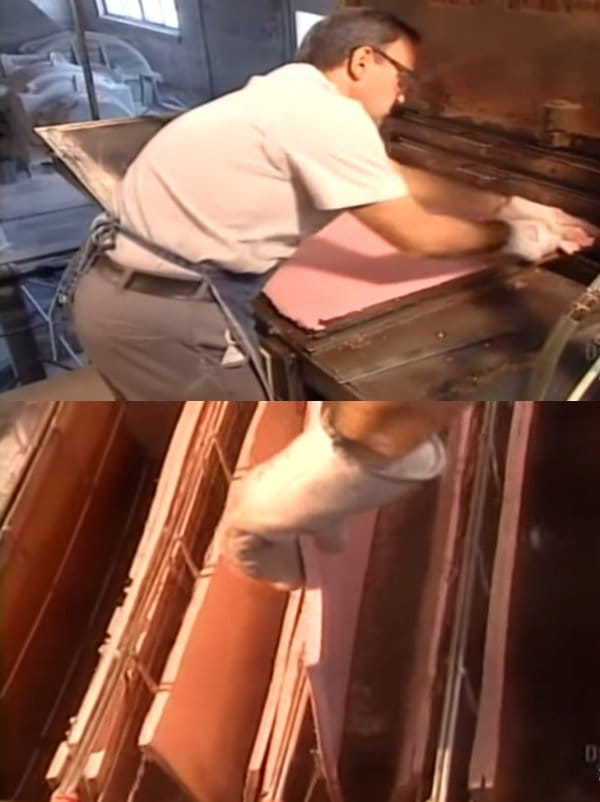 the worker then removes the excess rubber that has spilled out due to press and then it is put into cool water to stop the curing process. 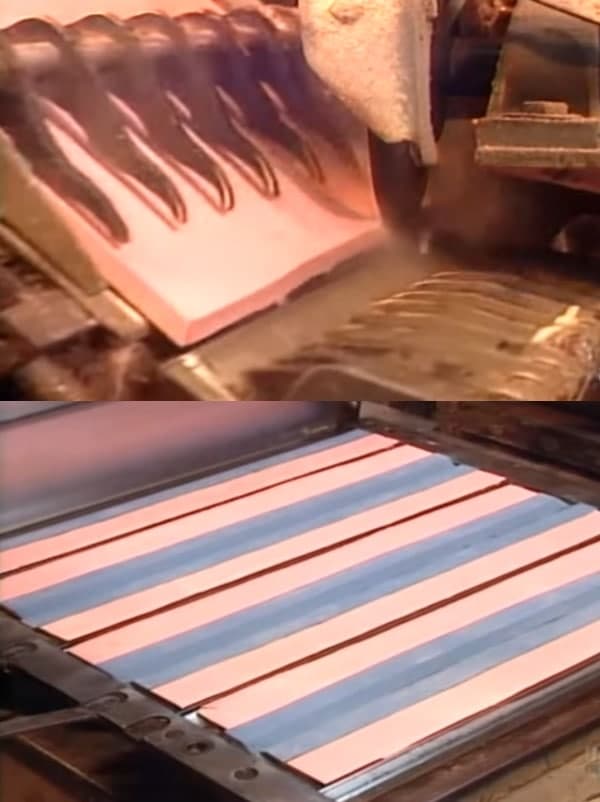 To make the duel rubber, 2 batches of rubber are used, one pink and other blue. They cut them into strips and place them alternatingly. The blue rubber contains pumice that makes the rubber more abrasive so that it can rub off the ink marks.

Next, the rubber goes into the stemmed press again for 12 minutes. Then the same process of cutting of the extra edges and putting it in cold water is done again. 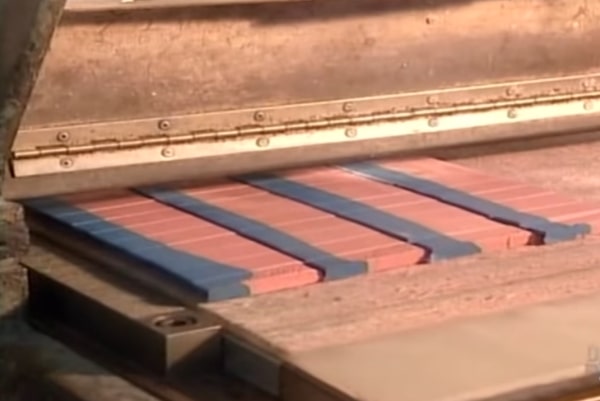 Then an automated machine cuts the rubber into blocks 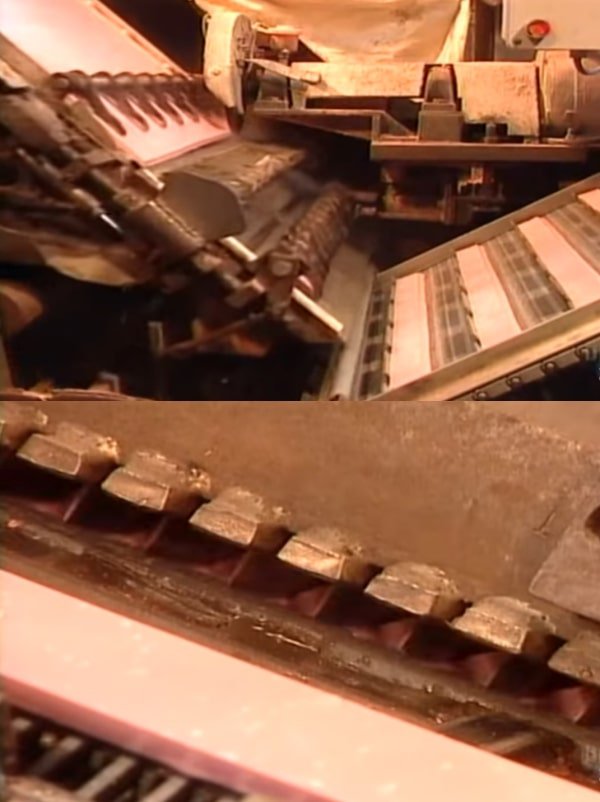 As for the all pink erasers, the rubber comes out form the cold water and then goes through a machine that cuts the rubber into equal parts. 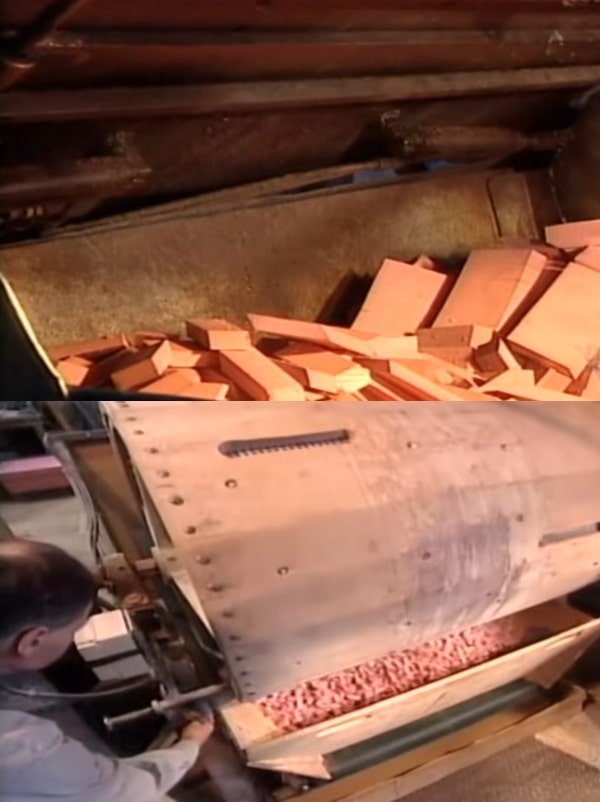 The erasers drop into a big barrel where a worker puts some talc to prevent them from sticking to each other. The barrel is then set to rotate for about 3-5 hours. 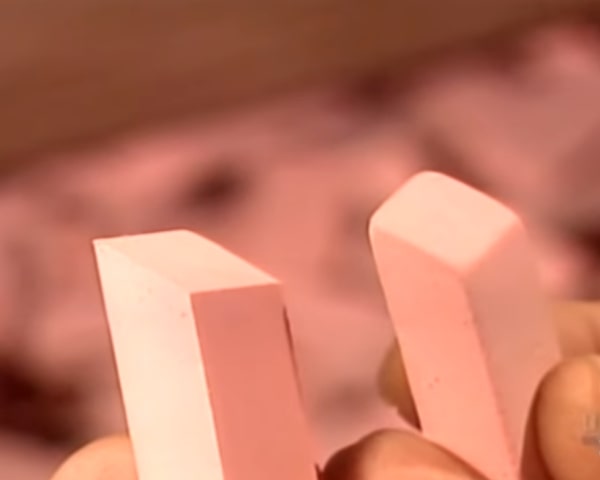 After this process is done, the sharp edges of the rubber are softened due to continues rotation and friction. 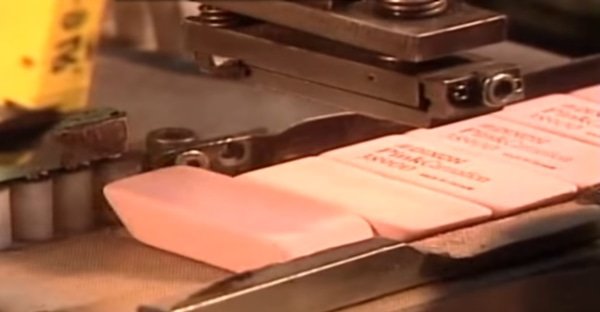 After this, the rubbers are sent for printing the name of the company that has ordered it. a press is used to stamp in the name of the company in the way it wants. Then a worker takes the batch and fills it in boxes. The erasers are now ready to be deported. The rubber gets its rubbing ability due to the vulcanized vegetable oil mixed in it. it makes the eraser crumble on the paper taking away ink or graphite marks with it. 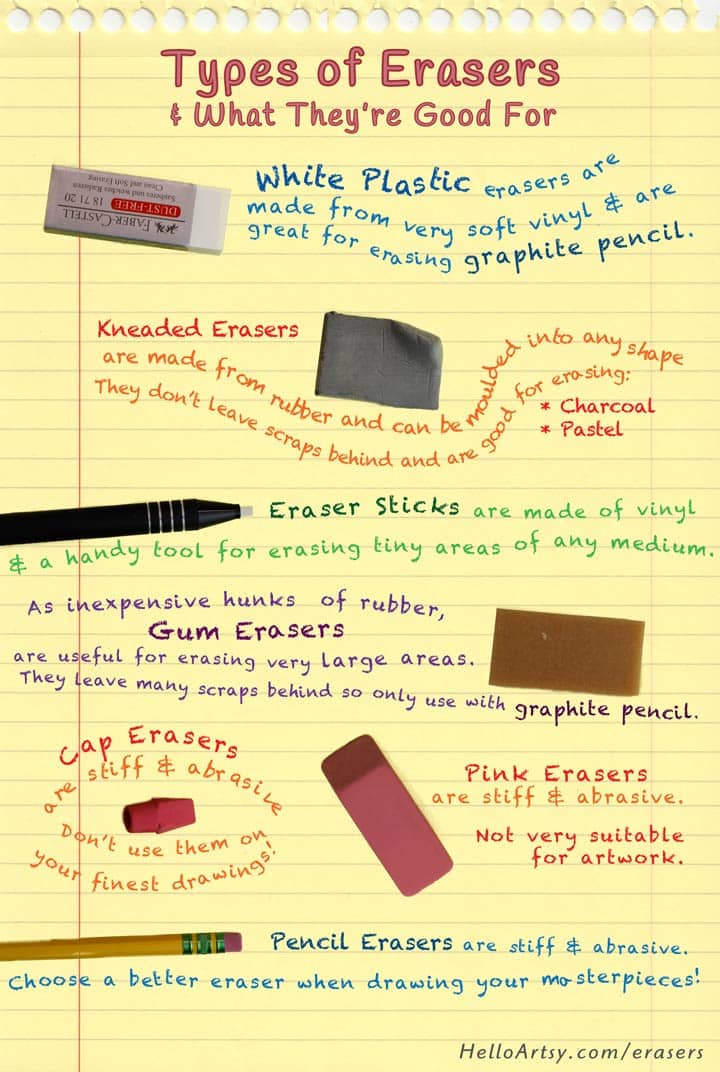 The one we told you about was the pink eraser. However, there are many types of erasers, which are

So this was How Eraser Is Made. We hope you liked reading about it and all the information that we gave you. A simple eraser goes through such a process or curing, let’s get inspired and strive hard to be perfect. For no struggle will lead to no success. With this, here are How Zippers are Made | Raw Materials, Manufacturing and Quality Control! 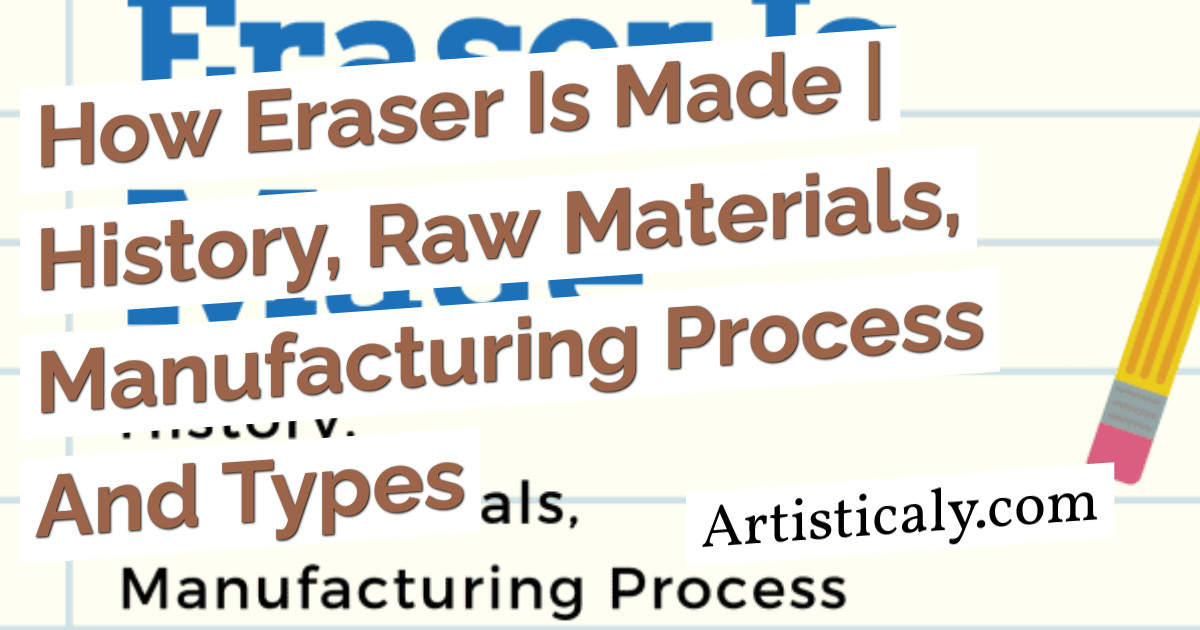